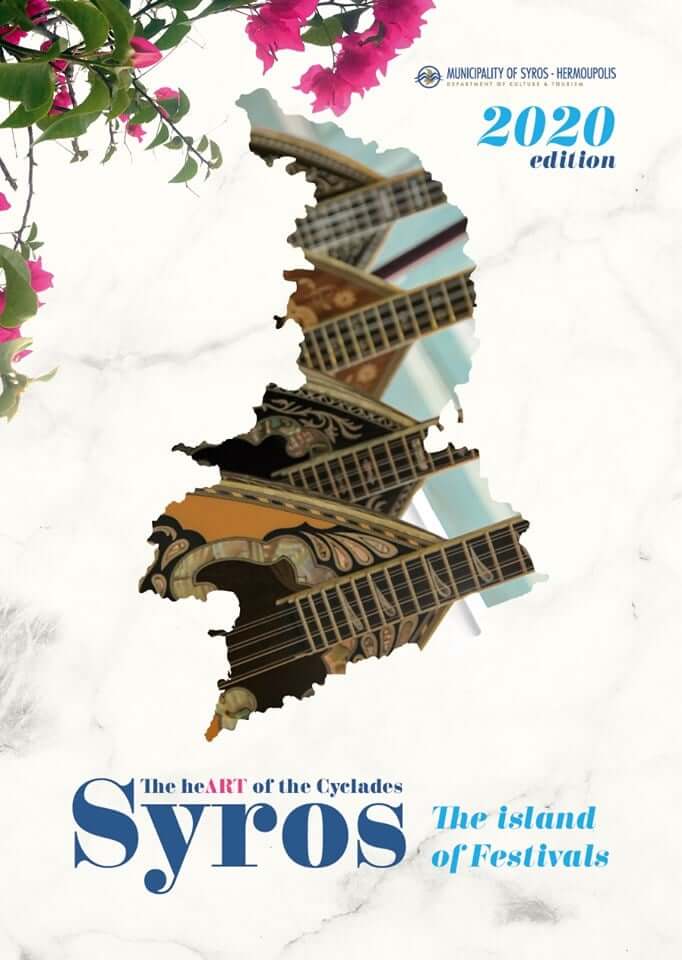 In the traditional dance festival "Syrianopato", children's and adolescent dance groups present a rich music-dance program with traditional dances from all over Greece! The festival is organized by the Folklore Dance Group "The Wisdom of Tradition".

The Hermoupolis Choir Festival is a great initiative of the Syros Music Group, which has been established as an institution in the cultural events of Syros, with the participation of Choirs from all over Greece and abroad.

- 1st International Festival of Latin American and African Dances ”from June 18 to 22, 2020

Acropoditi Dance Center, after the founding of the "International Dance and Dance Festival AkropoditiDanceFest", with the vision of Angeliki Sigouros, is organizing the 8th International Dance Festival, with multi-faceted choreographers improvisation of clown technique, dance architecture, Alexander technique, Bodymusic, Theater, Flamenco and Yoga, creative dance workshop for people with and without motor disabilities, modern creative dance workshop for parents and children. It also includes dance and theater performances from Greece and abroad, as well as concerts in public spaces. It is noteworthy that in 2016 the Acropolis Dance Theater was awarded the Charles Koun Prize for MEDUSA Performance and its overall work in Syros.

SIFF was founded in 2013 by the creator of the Jacob Moe Institute, in collaboration with Cassandra Celestine. An annual meeting of Greek and international independent films with major cinematic units, competitions, short and feature films, tributes and many parallel events and discussions taking place in remodeled and traditional spaces of the island. The International Film Festival has secured great collaborations, such as the Stavros Niarchos Foundation and the Onassis Foundation Housing. An unusual experience with great filmmakers from Greece and abroad addressing all of our senses at the same time!

Creative gathering of music teachers and students at the Syros Guitar Festival. Top musicians and educators, rich program with evening concerts, international competition "Guitar Games", MasterClass, Seminars for beginner students, guitar orchestra by participating musicians. Artistic Director of the Festival is Angelos Nikolopoulos, who as a result has managed to create one of the oldest Festivals that have been successfully held all these years on the island.

Every summer accordionists from all over Greece and abroad make an appointment in Syros and share their passion for music. Since 2012 the festival has been a voluntary effort by accordionists and accordion friends. Representatives of the "Windy Wind" competition Kristel Lukic and Kadia Printzis, driven by their love for the accordion, aim to bring it to life in all its dimensions. For the ninth year in Syros, the festival includes great accordion music performances and the pioneering of the only event for this musical instrument in the whole country. Well-known artists, seminars, accordion exhibitions, children's workshops, concerts and dance parties.

The syroskidz Cyclades Children's Festival was organized for the first time in the summer of 2017 in Syros. Since 2018 syroskidz has been traveling to other Cycladic islands (Folegandros, Sifnos, Kythnos, Kimolos, Donoussa) and is exclusively for children. The intention of the Festival is to attract a children's audience from all over Greece and abroad, encouraging visitors to find islands in the Cyclades whose tourist traffic is encouraging. Already, the three years of the Festival and the five years of the Outdoor Children's Painting Exhibition (with children from all Cyclades participating in their projects), which is part of the festival, have demonstrated its appeal to local communities and created new creations for except Greek.

The festival connects Syros' unique architectural heritage with contemporary videoinstallationart art. Friendship Milidakis and her team have created a festival of worldwide originality. International artists create videoin-stallationart in the neoclassical buildings of Ermoupolis. The festival is the only public artfestival in Greece. Their canvas is the city's buildings where the arts of videoinstallation, art & performingart meet.

The 13th Ermoupolis Independent Rock Festival presents bands from Syros and all over Greece. The Syrian rock scene continues to support local bands, while also giving its audience the opportunity to watch new bands traveling to the island exclusively for the festival.

High-level artistic concerts with orchestras from abroad. Chamber music directors and soloists and great performers. The festival is now an international institution, it travels in time, it remembers all the international artists who have honored it, such as Leonidas Kavakos, NobukoImai, MichaelaMartin, FransHelmerson, RadovanVlatkovic, Yiannis Bakarelis, Kos.El. a rich and versatile program at the Apollo Historical Theater. The prominent Greek violinist, the first leader of the Greek National Opera and artistic director of the Yiannos Margaziot Festival, was one of its creators.

The "Ano" Ecclesiastical Festival is organized by the Catholic Diocese of Syros and the Association of Greek Catholics, aiming to offer high-level artistic events, highlighting the uniqueness of the church organ of the Cathedral of the Holy See oldest church organ in operation in Greece - built in 1888 by the famous ZenoFedeli. It takes place in a magnificent spot on the top of the island with unobstructed views of the Aegean Sea, creating a major attraction in the medieval settlement of Ano Syros.

The Rebetikou Festival was started in 2016 by the Municipality of Syros - Ermoupolis, in cooperation with the Society for the Development and Progress of the Chamber of Cyclades, and was established as an institution in the cultural events of Syros. The relation of Syros to urban folk music, which has been an integral characteristic of the cultural element since the early decades of the 20th century. in the musical events of our island and the respect and recognition in the work of the great Markos Vamvakaris, who has made Rebetik music and the island known all over the world, formed the springboard for the creation of the "Markos Vamvakaris" Festival.

The festival includes a wide variety of events, including concerts, theatrical performances, lectures, exhibitions, seminars and children's events, in order to highlight the contribution of Syrian Mark Vamvakaris and his birthplace in Greece and abroad.

Animasyros has become one of the 20 major animation festivals in the world. Festival President Vassilis Karamitsanis, out of his love for Syros, has created an international festival that stands out. Includes competitions, special screenings in Posidonia and the medieval settlement of Ano Syros, film presentations, tributes, secret screenings, important international guests, training workshops for people with disabilities and the Market, an annual professional meeting of top executives . It hosts hundreds of animated characters and even more animation friends from around the world, with great collaborations such as the Onassis Foundation Roof and the National Opera.

SyrosJazzFestival was created by the love of Syrians Vangelis Aragiannis and Yiannis Roussou for Jazz music. It started in 2013, but the cast had organized many major concerts in previous years, starting in 2016. One of the highlights of 2010 was the presence of two great American artists, bassist MilesGriffith and tudor ClarencePenn. The festival hosts important bands from Greece and abroad every year. In addition to concerts, it includes improvisation seminars and screenings of jazz films at the Apollo Theater, as well as parallel events that stand out for their quality. The Festival's events are the highlight of the October program of the Municipality of Syros - Ermoupolis, which is now an integral part of the island's culture.